We’re half way (more than half way!) through January now, congratulations! I HATE January like most people, I just see it as freezing, grey, miserable and boring. Nobody has any money, nobody wants to go out and have fun. We’re all hibernating at home and occasionally at the gym (which I also hate because I can never get on the machine I want!). Anyway, this isn’t meant to be a rant post so I’ll move on, we’re almost there!

So last Sunday I went to Richmond (SW of London if you’re reading this from abroad!). I had never been before as being a North Londoner it is rather a faff to get to and I obviously don’t have a car because let’s face it who does in London! (Unless you’re mega rich in which case good for you!).
One of my close friends has recently bought a flat around Richmond in a new development build, it’s gorgeous and I’m VERY jealous as I’ll probably be about 40 before I can afford a house in London. So therefore my boyfriend and I took a day trip down there to check out his pad and visit the area.

There was also another reason I wanted to visit the area and that was to go deer spotting in Richmond Park which I can tell you is amazing. I love deer (bit weird), they’re just so cute and peaceful and shy. At least that’s what I’ve seen, I’ve never been attacked by a deer (touch wood) and have never heard of a deer attack (perhaps I should Google?) so let me know if you have!

Anyway, we ended up walking for quite a while before we found any, just to pre-warn you if you’ve not been to Richmond Park, it’s ‘MAHOOSIVE!’. My friend kept saying ‘keep a look out for their poo as that means they’re close’ which cracked me up, as if deer don’t move around?
But we found them in the end, a big group of them in what I’d call ‘the outlands’ as it’s so eerie and reminds me of something in The Lion King (god I’m cool!). They walk away the closer you get but it’s just wicked to watch them and take in the beautiful view.

After we found the deer and took lots of pictures (take a look below at some of my pics!) we then walked from there to Richmond town centre which is lovely in itself. Lots of great shops like Bimba Y Lola, Anthropologie, Zara, Topshop etc and lots of pubs, restaurants and cafe’s. You can really have a great day spent there. I’d recommend getting the train or overground depending on where you live to Richmond station. It’s in the heart of the town and lots of buses go from there that will take you to the park. Or you could walk it, I’d say a 20-30 minute walk?
All in all I’d definitely recommend a day trip for shopping, eating, drinking and of course; deer spotting.

See below some of my pictures…

I have decided this should be my house. Except it isn’t a house but a kind of cafe/events room in the middle of Richmond Park. 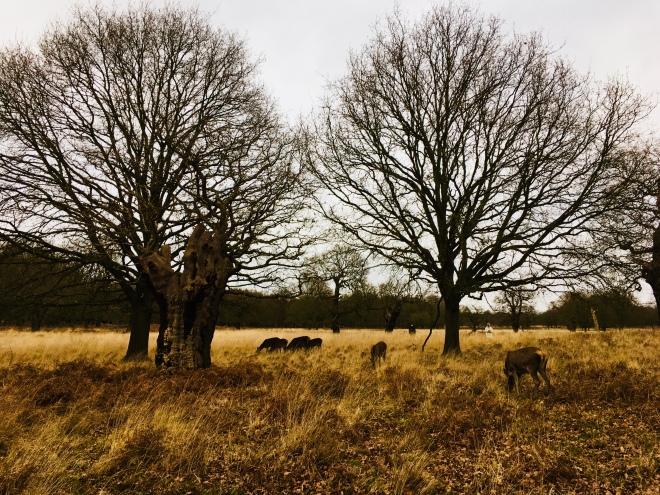 Brilliant fail! It was windy…

But I finally got my picture with my new besties.