Happy Sunday morning! I hope everyone has had a good week, apologies for this blog post being a little late; computer issues yesterday!
I definitely had a rather good week as on Friday I found out that I’ve been promoted! Always nice to know you’re doing a good job, simple as.

Anyway, I’m not talking about that on this week’s post, instead I want to share with you something I’ve been thinking about for a few weeks now and that’s about embracing who we are as a person and not being afraid to show the real us on social media.

We’re all a bit crazy in some way or another – some of us have slightly unusual hobbies, some might like rather strange sandwich combo’s (my sister used to LOVE jam and sweet corn sandwiches!) and some of us say rather odd things too.
People have always laughed at some of the things I’ve said (without me trying to be funny). My mum used to always say to me ‘you see the world differently to everyone else’, not quite sure what that means but my family have adopted this word they use for when I say something slightly odd called ‘Hattieisms’ (charming!). An example would be… when we were skiing the other week, I was talking about someone getting the piss taken out of them (long story) and I said by accident ‘they’re going to get the rip shit out of them’ instead of saying ‘they’re going to get the shit ripped out of them’, it’s actually a very weird saying anyway when you think about it! Anyway, for the rest of the holiday whenever we were teasing someone we’d all go ‘rip shit rip shit rip shit’ – I told you, odd!

If you can laugh at yourself then those kind of situations become more fun and less embarrassing or felt as a negative poke. That is something I definitely learned growing up, I’m always going to make people laugh by being myself with my ‘Hattieisms’ so if I can laugh along with them then life will be a lot easier.
With that in mind, I’m going to try and show more of my true self in life and especially on Instagram where everything can often seem so fake.
Here’s a list of facts about me…

1), I love trains. Always have, always will. I used to have a beautiful wooden train set as a kid that I’d spend hours making around the house. I love travelling on a train (as long as I get a seat and it’s not delayed!) and I absolutely love any train TV programmes, like Great British Railway Journeys and Crossrail documentaries. Also one of my favourite films is The Railway Children – I wanna be one of those kids! When I first started dating my boyfriend, Sam, I went to his family’s home for Christmas, they live in the countryside around Leceister. Sam mentioned to his family that I love trains (thank you Sam, great first impression!), so they suggested he took me to see the old steam trains at Rothley railway that still travel between Loughborough and Leceister – It was so cool! 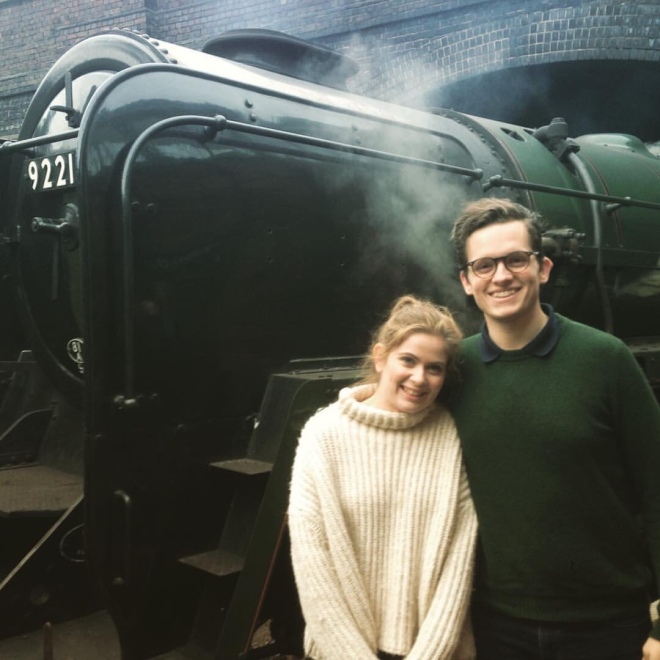 2). Talking of TV I also love basically any drama shown on ITV3, an example would be Rosemary & Thyme which I adore (seen every episode at least twice), I just love Pam Ferris so much! I also love New Tricks (definitely seen all of those episodes), it used to be on BBC 1 but they stopped filming them now… so going to miss Dennis Waterman.

3). I hate exercising. I do it because it’s good for me but for me, not enjoyable. It’s not because I’m lazy because I love a long walk on a Sunday and I love dancing but going to the gym, doing a class or going for a run is not fun. I don’t understand endorphins as I’ve never felt them, even after running for an hour they don’t appear. I’m sure some of you feel the same way but quite often it’s not talked about, all you see is gym bunnies on Instagram working out 5 times a week.

4). I love food so much and can eat and eat and eat. It would be very easy for me to let myself go and become overweight – if you’ve read my other posts then you’ll know this already.

5). I dress like a nutcase sometimes with my bright outfits (again, see other posts) and my ‘casual up-do’ hair styles when at home look very funny. My hair is quite thick and long so I always tie it up in a loose bun on top of my head. Which is actually where I got my inspiration from to be a dead unicorn for Halloween 2 years ago…

So on my Instagram page you will definitely see more ‘up-do’s’, more of me with no make up on and more of me in pictures where I’d normally say ‘oh that’s hideous, you’ve got to delete that’. I’ve created a story highlight on my account called ‘My Realness’ which is where I save every weird and real story of myself.
I just want my Instagram account to represent who I am as a person not what other people look like. A lot of bloggers on Instagram have these beautiful looking accounts with pictures of their travels, outfits, ‘blogger mails’ all in matching colours and filters. Don’t get me wrong, they look really stunning and if that is what appeals to you then that’s great. However, Instagram accounts that appeal to me are ones that are more genuine. For example, Chessie King, Laura Jackson and Fearne Cotton are all amazing women that I love to follow who are championing this way of thinking on social media and I’m sure there are others too.

So to end this week’s post, I’m going to leave you with some rather gorgeous pictures of me…

This is what I sometimes look like in the morning, nice ‘casual up-do’!

When this photo was taken, I said ‘ugh I look so fat, delete!’, but reconsidered and decided to post it instead…

Lots of love to you all and your craziness! Xxxx