Happy weekend! I’m currently writing this on the train heading back to Norfolk as it’s my cousins 21st birthday this weekend. Got myself a couple of G&T’s in a can and some music on; celebrating the end of the working week!

So Thursday night this week I went to a workshop, in honour of Mental Health Awareness Week, held at Wolf & Badger in Coal Drops Yard (my usual hang out as you know; I’m there nearly every week!). It was hosted by this amazing woman called Jemima who set up her brand JEMIMASARA over a year ago. While Jemima was studying at university, she was dealing with bad anxiety and insecurities about herself at the same time. To help her cope with her anxiety, negative thoughts and worried feelings, Jemima began to doodle and draw her thoughts out whenever she needed to, the same as someone would write their thoughts in a diary. This eventually led to drawing and designing her own alter ego character called Sally. I won’t go into too much detail as this is Jemima’s alter ego not mine but Sally is basically a confident, sassy woman with a cracking body (in my opinion; great curves!) who loves a Martini. The character Sally helps Jemima mentally deal with certain situations in life. For example, when needing to respond to a difficult and sensitive email in business, she thinks of what sassy Sally would do in this situation. 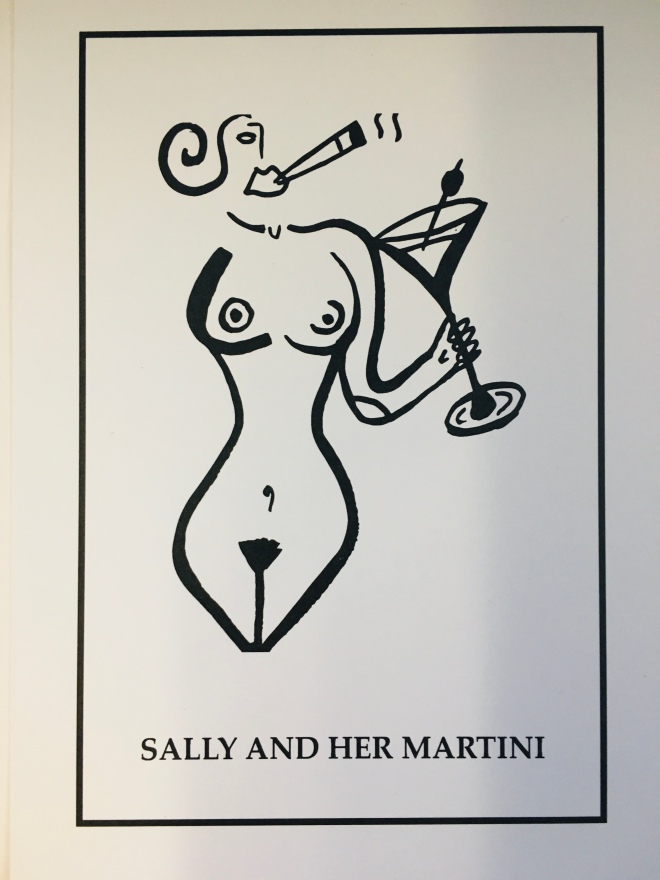 So at the workshop Jemima had us first close our eyes and with a pen and piece of paper, draw ourselves from our mind without letting the pen leave the paper (if you did art at school then you probably have done this exercise like I have). We then went round the table (there was about 13 of us attending) and discussed our drawings. It was really interesting to see what people focused on in their drawings; the parts of their face that they feel stand out the most which you might not necessarily notice. My drawing is below (hilarious right, in my defence it was meant to be a quick drawing!). The part of my face that I focused on and saw as a stand out feature was my eyes which are quite protruding to me when I look in the mirror.

The next exercise we were asked to do was to touch the part of our body that we least liked and feel self conscious about. For me it was definitely without even a thought, my hips. I have always had negative feelings toward my large hips that give me a somewhat hourglass figure. But interestingly it’s never my boobs that I feel negative about even though they definitely contribute to my overall figure equally as much (I am a size DD 32 waist for context and range between a 12-14 on my hips). We were asked to grab or touch this part of our body, close our eyes and draw it or them. It was a strange feeling focusing and imagining a part of my body that I try to avoid thinking about too much. It really connected me with my body and made me think about my hips in a positive way as I was essentially getting inspired by their form in order to be creative and draw them – below are what my hips and bum look like to me with my eyes closed.

Next we had to write two lists, one being a ‘compost heap’ list and the other a ‘scrap heap’ list. The compost heap was everything you do like about yourself and your personality, your interests and passions. Then the scrap heap (well you can imagine) was everything you don’t like about yourself – the parts of your personality you wish you could change perhaps. See below my compost and scrap heap lists…

Compost Heap:
Socialising and laughing with friends
Being loyal
Writing
Fashion, shopping, clothes, make up
Business and entrepreneurship
Dancing
Passionate
Being positive (most of the time)
Exercise (when I want to)
Being confident
Being ambitious
…(There’s probably more but that’s all I can think of now)

Scrap Heap:
Emotional
Sensitive
Always needing to be inspired with something new to feel alive/energised (this could maybe be a compost as well?)
Wearing my heart on my sleeve
Over thinking – massive culprit!
Too much of a planner when it comes to life goals and then worrying when it doesn’t go to plan
Not being able to switch off – I’m always looking for the next thing, thinking ahead and never quite in the moment
… (again there’ll be loads more but I won’t bore you)

Once we had our lists, we had to draw up a sketch of a being, a character, anything really that combines our scrap heap with our compost heap. A being that is every bit of me but with an element of something I inspire to, look up to and use to my advantage when I don’t know what to do.

The Boss Fairy is confident, she’s sassy, she’s cool and glamorous at the same time (is that even a thing?). She is a boss, naturally, and has her own successful business (think Sheryl Sandberg). She’s always looking for inspiration and inspires other people. She puts her heart into every project or venture which has helped her become successful. She has the most incredible walk in wardrobe (if you know me you’ll know I’ve always banged on about having one someday) and feels empowered by feeling good which comes from looking good – by feeling fit and healthy as well as by wearing certain outfits. She’s always got a mobile ringing or emails pinging but has these beautiful wings that mean she can flit away to wherever (a beach, her home, her bed) when she needs to get away from it all.

The Boss Fairy is me but 2.0 version. There’s elements of her that I aspire to be alongside elements of the true me that I do and don’t like about myself. She is my alter ego.

This creative way of dealing with anxiety and negative thoughts is such an inspiration that I’d never heard of before and I’m totally going to use it in the future. I’ve attempted so many diaries that just end up having one entry in. Instead I can start to doodle the worries that I want to get out of my head to help me – get to sleep most of the time!

I’m definitely going to turn to The Boss Fairy when I need to deal with something difficult (either in a situation in life or perhaps in my head when I’m frantically worrying about something) and use her as inspiration when I’m lacking in some.

Have a think, what would your alter ego look like? What characteristics would it have?

Thank you so much to Jemima for hosting her workshop, it was truly an inspiration as are you yourself.

Lots of love to The Boss Fairy, Jemima and all of you reading this xxxx