Happy Pride! I am writing this at home, nursing a cup of coffee (or 3) and feeling rather hungover. I was at the London Pride parade yesterday and it was INCREDIBLE. The atmosphere was electric and I just had the biggest smile on my face all day. You could see and feel so much love and acceptance it was quite mesmerising. Everybody was so happy and free with their hands up in the air, forgetting all their worries even for just a dance or two. Strangers were making friends and chatting (a rarity for London) and there was a woman with a sign giving out ‘free muma hugs here!’. At one point I was close to getting emotional (the gin probably helped) because there was so much love and kindness bursting out of everyone.

Not everyone supports Pride and there are many reasons why not, everyone has a right to their own opinion. Some people might say, we shouldn’t even need to have a parade to support LGBTQ as it should already be accepted daily into society. Others might be against it because it only touches the surface of what LGBTQ really means with people not understanding what lots of different identities represent. There was a float in the parade yesterday that was supporting pansexual and someone behind me asked what does that mean exactly. To tell you the truth, I am still learning about different identities but I don’t think that’s a bad thing. I am eager to learn more about it and the more people do learn the more accepted into society it will be. The pubs around Soho and Regent St were serving drinks in take away cups sponsored by Budweiser. There were lots of different colourful striped ones, we got the pink, yellow and blue ones that support pansexual and it explains what it means on the back.

At the end of the official parade there is the anti parade protestors marching and I heard this one guy shout ‘if you’re not part of LGBTQ then you shouldn’t be here, this is our day!’. I don’t agree with that. No I do not associate with being gay or trans or any other identity apart from straight but that does not mean I cannot show my support or even feel part of the community in some way. To me the parade and pride is not just about being LGBTQ but it is about feeling accepted no matter who you are or what you look like. It is about feeling free to be who you want to be and showing off your true self.
I have always been a bit different compared to perhaps my family, my friends etc. My mum always says to me ‘Hattie you see the world different to everyone else’, my mum thinks I’m a weirdo haha. I dress like a bright glittery pink lunatic the majority of the time and I do that because that is who I am. I am obsessed with colour and it makes me feel great. I like to push the boundaries when it comes to fashion by clashing colours and prints and wearing something different. The majority of the time I feel proud and confident in how I look. You’re probably thinking ‘but you don’t look that unusual’ but trust me I have gotten some weird looks on the tube or down the street and even some comments like ‘Oh dear, what IS that girl wearing’ and some not so secret giggling and whispering opposite me on the tube. I know that’s nothing compared to what some people go through, I’ve been on a night out with one of my best friends before where this awful man has shouted at us across the street abusive homophobic words; disgusting. To me pride is about pure acceptance to be who you want to be and dress how you want to dress. 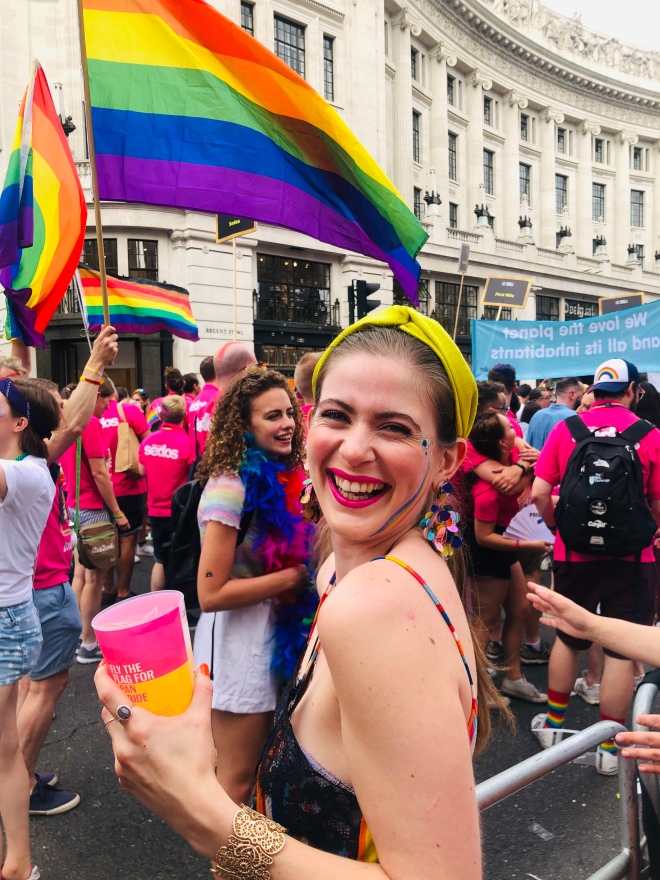 I was in New York last week (next weekends blog post!) and it happened to be World Pride then as well! World Pride in New York was even bolder and louder (like everything is in the big apple) and the atmosphere was even more electrifying. Everywhere we walked in New York there was street art and signs supporting Pride! 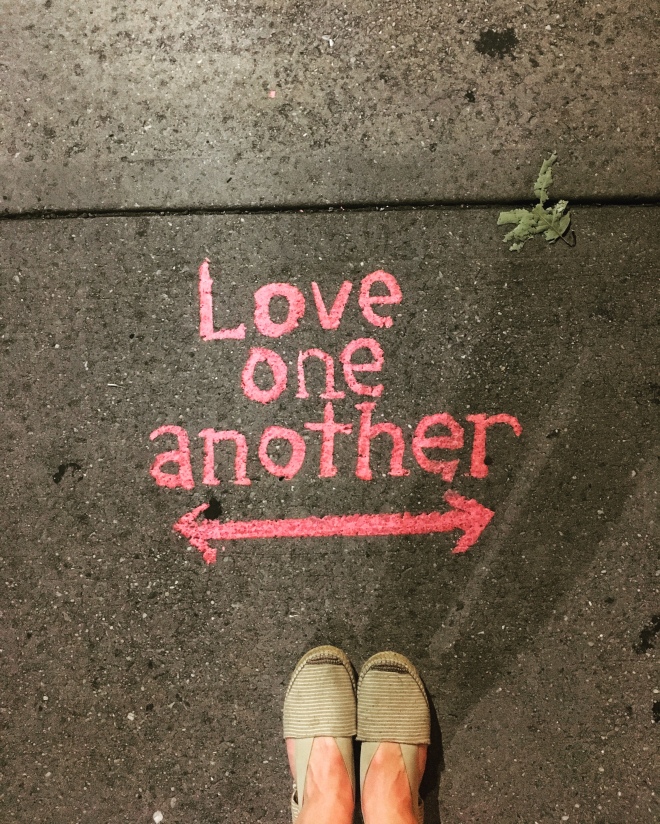 My boyfriend and I, who were their together, also visited The Met, Camp: Notes On Fashion, exhibition which was the theme of this year’s Met Gala. I was blown away. This exhibition was just so inspiring, I thoroughly recommend everyone going and seeing it if you can, it’s worth jumping on a plane for! I hope it comes to the UK as well.
It started with explaining what the word camp means and where it came from. It’s quite interesting if you don’t know, the word came about around the year 1870 when a letter was discovered by the local authorities written by a man called Frederick Park. He was a secret crossdresser who was writing to his ‘friend’ or sometimes his ‘sister’ called Stella using the words ‘campish undertakings’. Frederick Park was being charged for illegal homosexual acts in London when this letter was discovered. The local authorities didn’t know what ‘campish undertaking’ meant but were very suspicious of it and didn’t want those words to ever be used. Then in the 1909 Oxford English Dictionary, the word camp first appeared with the meaning being ‘ostentatious, exaggerated, affected, theatrical; effeminate or homosexual; pertaining to, characteristic of, homosexuals. So as a noun, ‘camp’ behavior, mannerisms, et cetera. (cf. quot. 1909); a man exhibiting such behaviour’. Below is a picture of Frederick Park, also known as Fanny, and two beautiful dresses from Erdem’s SS2019 show which paid tribute to these two iconic cross dressing lovers who were prosecuted in 1870 just for being themselves. When the police discovered their ‘drag wardrobe’ they were shocked as it was so extensive. It included day and evening dresses, corsets, hair extensions, boots, shawls, petticoats and lots more. It sounds like they had a very glamorous wardrobe, I’m quite jealous!

The exhibition then goes onto to discuss Susan Sontag’s 1964 essay called Notes on Camp and at the end shows 21st century fashion displaying notes of camp and camp style in their designer shows. I won’t show you all the pictures but the designs and the outfits and the whole exhibition was just incredible. It made me feel proud and inspired me to continue dressing camp, which I associate my style with. 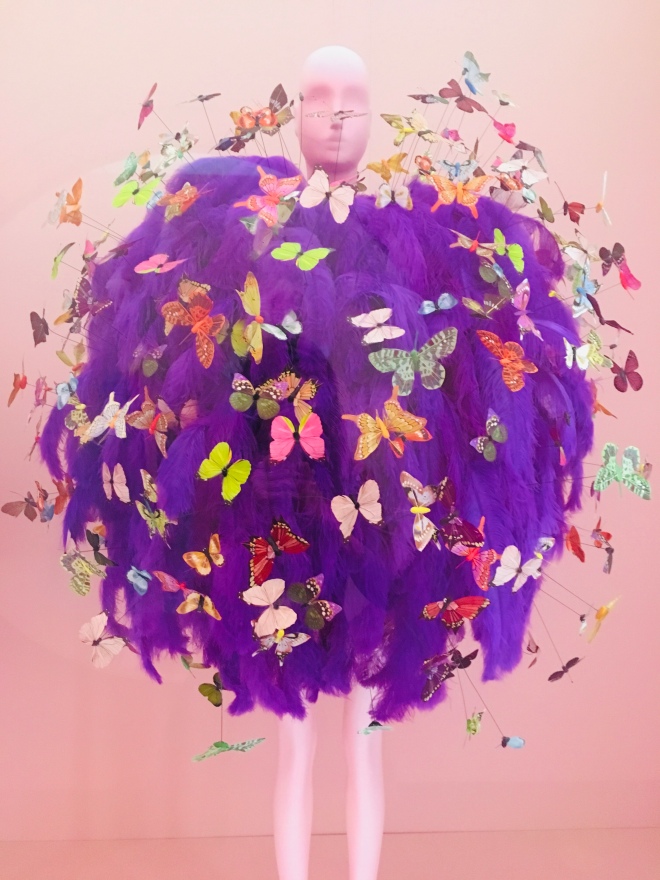 So I will continue dressing in my camp style, especially with my new kick ass Converses that I bought in New York! So in love, loud and proud.

So whether you support pride or not, whether you associate yourself with being part of LGBTQ or not or whether you don’t really know what any of it even means, all we can do in life is offer love, support and understanding to those we know and those we don’t.